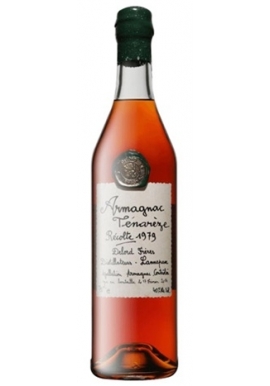 Armagnac is the oldest brandy distilled in France, and in the past was consumed for its therapeutic benefits. In the 14th century, prior vital Du Four, a Cardinal, claimed it had 40 virtues. It makes disappear redness and burning of the eyes, and stops them from tearing; it cures hepatitis, sober consumption adhering.

It cures gout, cankers, and...

Armagnac is the oldest brandy distilled in France, and in the past was consumed for its therapeutic benefits. In the 14th century, prior vital Du Four, a Cardinal, claimed it had 40 virtues. It makes disappear redness and burning of the eyes, and stops them from tearing; it cures hepatitis, sober consumption adhering.

It cures gout, cankers, and fistula by ingestion; restores the paralysed member by massage; and heals wounds of the skin by application. It enlivens the spirit, partaken in moderation, recalls the past to memory, renders men joyous, preserves youth and retards senility. And when retained in the mouth, it loosens the tongue and emboldens the wit, if someone timid from time to time himself permits."

Between the 15th and 17th centuries, Armagnac was traded on the markets of Saint - Sever, Mont-de-Marsan, and Aire-sur-l'Adour. Dutch merchants began promoting the trade more widely.

The Armagnac region lies between the Adour and Garonne rivers in the foothills of the Pyreness. The region was granted AOC status in 1936.The official production area is divided into three districts that lie in the departements of Gers,Landes, and Lot-et-Garonne. Armagnac is traditionally distilled once, which results initially in a less polished spirit than Cognac, where double distillation usually takes place. However, long aging in oak barrels softens the taste and causes the development of more complex flavours and a brown colour. Aging in the barrel removes a part of the alcohol and water by evaporation (known as part des anges—"angel's tribute" or "angel's share") and allows more complex aromatic compounds to appear by oxidation, which further improves the flavour. When the alcohol reaches 40%, the Armagnac can be transferred to large glass bottles (called "Dame Jeanne") for storage. From then on, the Armagnac does not age or develop further and can be bottled for sale from the next year on.

Armagnac is sold under several different classifications, mostly referring to the age of the constituent brandies. When brandies of different ages have been blended, the age on the bottle refers to the youngest component. A three star, or "VS," Armagnac is a mix of several Armagnacs that have seen at least two years of aging in wood. For the VSOP, the aging is at least five years; and for XO, at least six. Hors d'âge means the youngest component in the blend is at least ten years old. Older and better Armagnacs are often sold as vintages, with the bottles containing Armagnac from a single year, the year being noted on the bottle. Armagnac should be stored vertically to avoid damaging the stopper with alcohol. Once opened, a bottle should stay drinkable for years.

Armagnac has its age requirements, like cognac, with the dating period starting on September 1st in the year after the harvest. Three Star in France will mean a minimum of one year, though for Britain and and the US, the requirement is three years. The Classifications are as follows:

One or two houses confine themselves to offering only Bas Armagnac blends, and will say so on the label. In a blended Armagnac the age statement must always reflect the youngest spirit in the blend. Blended Armagnacs frequently have a greater percentage of older vintages in their mix than comparable Cognacs, making them a better value for the discerning buyer. And of course, to the annoyance of the cognac makers, Gascogne's also do a thriving trade in those vintage dated armagnacs (such as the wonderful brandies of Domaine Boingneres & Janneau). However, as with most of the noble spirits, age itself is not a  guarantee of a better drink.

Most armagnacs peak, with regard to their fruit, alcohol and tannin balance, between their 18th and 30th birthdays. It is possible to obtain outstanding armagnacs distilled 30, 40, or 50 years ago; yet the majority that have remained in wood this entire time are overly dry and dominated by secondary aromas.

Armagnac  There are no products in this category