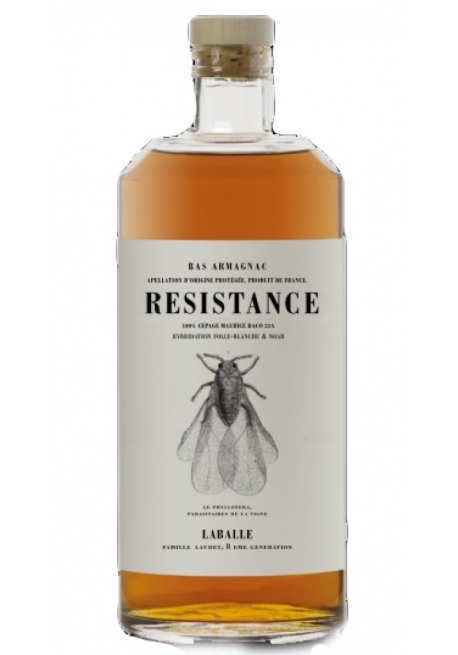 A new release, this vibrant, next-gen Armagnac takes its name from A: the phylloxera-resistant Baco hybrid developed at the turn of the twentieth century--the etching adorning the label illustrates the formidable parasite that devastated French vineyards around this time. And B: the fact that it makes a stand against those forces that would diminish Baco plantings in the region.

Until the late 1970s, Baco remained the prime ingredient in Armagnac and while Ugni Blanc holds that position today, this variety--now exclusive to Armagnac country--has played an important role in the region's identity; a role that Cyril Laballe wanted to commemorate with Résistance. He also wants to show people why this variety is important, by showcasing it on its own. So, made from 100% Baco grapes, in consultation with the trade, this unique bottling took three years to get just right and consists of a blend of three Armagnacs distilled in 2009, 2010 and 2012.

Laballe's idea was to create an authentic young spirit that would shine on the back bar for use in cocktails as well as having enough depth and polish to be consumed neat. To this end, the three eaux de vie spent their first year after distillation in new 410-litre Chêne Noir Gascon barrels from Bartholomo (the last barrel maker in the Landes region) to develop texture and sweetness, and then the rest of aging in older barrels, bringing more earthy and savoury notes. On the nose, you are immediately struck by the distinctiveness of this grape, with aromas of apple, smoke and citrus giving way to a round, salty expression in the mouth that finishes with a hint of licorice. It's a delightfully elegant spirit with impressive balance of flavour, complexity and elegance as well as good length and the hearty weight you'd expect from a quality Bas Armagnac. Unique, and well worth the Résistance.

17 other products in the same category: