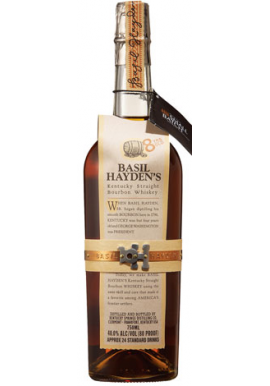 Bourbon is a purely American liquor and the pride of Kentucky, it is derived from corn, but other grains are involved. Bourbon must be at least 51 percent corn, at more than 80 percent , by Federal USA law it is denominated corn whiskey. We still think of bourbon in the genteel context of lush grass, horses, antebellum mansions, and branch water...

Bourbon is a purely American liquor and the pride of Kentucky, it is derived from corn, but other grains are involved. Bourbon must be at least 51 percent corn, at more than 80 percent , by Federal USA law it is denominated corn whiskey. We still think of bourbon in the genteel context of lush grass, horses, antebellum mansions, and branch water. The basis of the mint julep. On the other hand, we think of corn whiskey as the product made by the light of the moon by that quintessential American folk character, the hillbilly. The drink was celebrated in the cartoon strip L'il Abner as "Kickapoo Joy Juice". A more modern, urban image of bourbon has a hard bitten edge to it; it is the hard boiled private eye's preferred eye - opener and the preprandial of choice in yesterday's steak-and-chop houses pungent with the smoke of burning cigarettes and beef fat. Bourbon is still the foundation of a perfect Manhattan, and mint juleps are delightful before viewing the Kentucky Derby on TV, and no doubt there are still those who enjoy a bourbon and ginger ale - a" highball"

For bourbon production the nature of the barrel and aging process is especially important. All bourbon must be aged in new, charred, white oak for at least two years. White oak from cold forests, such as those in Northern Minnesota, is preferred. The wood grain is denser because the trees grow more slowly in the harsher climate. The wood is dried in a temperature controlled warehouse for thirty days. It is said that Maker's Mark, a premium bourbon, incurs the higher cost of leaving the wood in the open air for up to three years because this reduces the bitterness in the wood. After the drying, the wood is heated to reduce the moisture in it. The barrels are then assembled. they will have a fifty three gallon capacity, and when full of bourbon, weigh about five hundred pounds. After the barrels are constructed they are charred or "toasted" over a controlled but intense fire for one or two minutes. There are four levels of char, from light char to deep char. The deeper the char, the deeper the colour, aroma, and flavour of the bourbon. During the charring process, the starches in the wood are converted into sugars. By char level three, the sap is caramelised by the heat, creating a vanilla - like flavour and forming the "red layer" that will contribute to the character of a premium bourbon. After being filled with bourbon, the barrels are stored in warehouses on racks or ricks designed to allow air to flow around the barrels.

After - dinner bourbons are usually one of three types of ultra premium whiskeys: single barrel, small batch, and pot-still bourbon. Single barrel bourbons come from only one barrel, and the details of its manufacture are often handwritten on the bottle's label. These bourbons have received special treatment by being singled out by the master distiller as exemplary of a particular style.The 'Best of the Best".. Fine Single - Barrel Bourbons: to look for are Blanton's Rock Hill Farms, Elmer T. Lee, Benchmark, Hancock's Reserve, and Wild turkey's Kentucky Spirit. If it's a small batch bourbon you want, try Jim Beam (Booker's), Knob Creek, Barker's, Basil Hayden, and Woodford Reserve. however, if you want to seek out the best of the best, here are an expert's recommendations. For a ...Pot Still Straight Bourbon: made interestingly in Pennsylvania. Paul Pacult gives it the highest recommendation, and finds flavours of mint, banana, brown sugar, maple, and red fruit, to name several. For ... Small Batch Bourbon: he gives his recommendation to Barker's "7 Year Old Kentucky Straight Bourbon/Small Batch", noting that Baker's is the most cognac like American whiskey out there. Single Barrel Bourbon: he highly recommends Blanton's Single - Barrel Kentucky Straight Bourbon; Barrel No. 444, Rick No 9, Warehouse H - Bottled in Oct 1993." the highest rank is to Maker's Mark "Limited Edition" Kentucky Straight Bourbon, calling it "truly one of the great whiskeys.

Bourbon Whisky  There are no products in this category