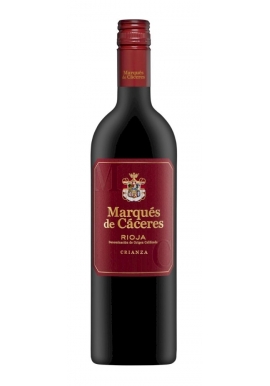 Spanish wines (Spanish: vinos españoles) are wines produced in Spain. Located on the Iberian Peninsula, Spain has over 1.2 million hectares (2.9 million acres) planted, making it the most widely planted wine-producing nation but it is the third largest producer of wine in the world, the largest being Italy and France, followed by the United Stat...

Spanish wines (Spanish: vinos españoles) are wines produced in Spain. Located on the Iberian Peninsula, Spain has over 1.2 million hectares (2.9 million acres) planted, making it the most widely planted wine-producing nation but it is the third largest producer of wine in the world, the largest being Italy and France, followed by the United States.This is due, in part, to the very low yields and wide spacing of the old vines planted on the dry, infertile soil found in some of the Spanish wine regions. The country is ninth in worldwide consumption with Spaniards drinking, on average, 21.6 litres (5.7 US gal) per person a year. The country has an abundance of native grape varieties, with over 400 varieties planted throughout Spain though 88 percent of the country's wine production is from only 20 grapes — including the reds Tempranillo, Bobal, Garnacha, and Monastrell; the whites Albariño, Airén, Verdejo, Palomino, and Macabeo; and the three Cava grapes Parellada, Xarel·lo, and Macabeo.

Major Spanish wine regions include the Rioja and Ribera del Duero, which are known for their Tempranillo production; Jumilla, known for its Monastrell production; Jerez de la Frontera, the home of the fortified wine Sherry; Rías Baixas in the northwest region of Galicia that is known for its white wines made from Albariño and Catalonia which includes the Cava and still wine producing regions of the Penedès as well the Priorat region.

Some records estimate that over 600 grape varieties are planted throughout Spain, but 88% of the country's wine production is focused on only 20 grape varieties.The most widely planted grape is the white wine grape Airén,prized for its hardiness and resistance to drop. It is found throughout central Spain and for many years served as the base for Spanish brandy. Wines made from this grape can be very alcoholic and prone to oxidation. The red wine grape Tempranillo is the second most widely planted grape variety.It is known throughout Spain under a variety of synonyms that may appear on Spanish wine labels including Cencibel, Tinto Fino and Ull de Llebre. Both Tempranillo and Garnacha are used to make the full-bodied red wines associated with the Rioja, Ribera del Duero and Penedès with Garnacha being the main grape of the Priorat region. In the Levante region, Monastrell and Bobal have significant plantings, being used for both dark red wines and dry rosé.

In the northwest, the white wine varieties of Albariño and Verdejo are popular plantings in the Rías Baixas and Rueda respectively. In the Cava producing regions of Catalonia and elsewhere in Spain, the principal grapes of Macabeo, Parellada, and Xarel·lo are used for sparkling wine production as well as still white wines. In the southern Sherry and Malaga producing regions of Andalusia, the principal grapes are Palomino and Pedro Ximénez. As the Spanish wine industry becomes more modern, there has been a larger presence of international grape varieties appearing in both blends and varietal forms, most notably Cabernet Sauvignon, Chardonnay, Syrah, Merlot and Sauvignon blanc. Other Spanish grape varieties that have significant plantings include Cayetana Blanca and Mencía.

Spain  There are no products in this category