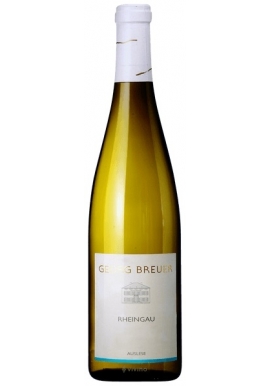 German wine is primarily produced in the west of Germany, along the river Rhine and its tributaries, with the oldest plantations going back to the Roman era. Approximately 60 percent of German wine production is from the federal state of Rhineland-Palatinate, where 6 of the 13 regions (Anbaugebiete) for quality wine are situated. Germany has abo...

German wine is primarily produced in the west of Germany, along the river Rhine and its tributaries, with the oldest plantations going back to the Roman era. Approximately 60 percent of German wine production is from the federal state of Rhineland-Palatinate, where 6 of the 13 regions (Anbaugebiete) for quality wine are situated. Germany has about 103,000 hectares (252,000 acres or 1,030 square kilometers) of vineyard, which is around one tenth of the vineyard surface in Spain, France or Italy.The total wine production is usually around 10 million hectoliters annually, corresponding to 1.3 billion bottles, which places Germany as the eighth-largest wine-producing country in the world. White wine accounts for almost two thirds of the total production.

As a wine country, Germany has a mixed reputation internationally, with some consumers on the export markets associating Germany with the world's most elegant and aromatically pure white wines while other see the country mainly as the source of cheap, mass-market semi-sweet wines such as Liebfraumilch.Among enthusiasts, Germany's reputation is primarily based on wines made from the Riesling grape variety, which at its best is used for aromatic, fruity and elegant white wines that range from very crisp and dry to well-balanced, sweet and of enormous aromatic concentration. While primarily a white wine country, red wine production surged in the 1990s and early 2000s, primarily fuelled by domestic demand, and the proportion of the German vineyards devoted to the cultivation of dark-skinned grape varieties has now stabilized at slightly more than a third of the total surface. For the red wines, Spätburgunder, the domestic name for Pinot noir, is in the lead.

Germany produces wines in many styles: dry, semi-sweet and sweet white wines, rosé wines, red wines and sparkling wines, called Sekt. (The only wine style not commonly produced is fortified wine.) Due to the northerly location of the German vineyards, the country has produced wines quite unlike any others in Europe, many of outstanding quality. Between the 1950s and the 1980s German wine was known abroad for cheap, sweet or semi-sweet, low-quality mass-produced wines such as Liebfraumilch.

The wines have historically been predominantly white, and the finest made from Riesling. Many wines have been sweet and low in alcohol, light and unoaked. Historically many of the wines (other than late harvest wines) were probably dry (trocken), as techniques to stop fermentation did not exist. Recently much more German white wine is being made in the dry style again. Much of the wine sold in Germany is dry, especially in restaurants. However most exports are still of sweet wines, particularly to the traditional export markets such as United States the Netherlands and Great Britain, which are the leading export markets both in terms of volume and value.

Red wine has always been hard to produce in the German climate, and in the past was usually light-colored, closer to rosé or the red wines of Alsace. However recently there has been greatly increased demand and darker, richer red wines (often barrique-aged) are produced from grapes such as Dornfelder and Spätburgunder, the German name for Pinot noir.

Perhaps the most distinctive characteristic of German wines is the high level of acidity in them, caused both by the lesser ripeness in a northerly climate and by the selection of grapes such as Riesling, which retain acidity even at high ripeness levels.

The wine regions in Germany usually referred to are the thirteen defined regions for quality wine. The German wine industry has organised itself around these regions and their division into districts. However, there are also a number of regions for the insignificant table wine (Tafelwein) and country wine (Landwein) categories. Those regions with a few exceptions overlap with the quality wine regions. To make a clear distinction between the quality levels, the regions and subregions for different quality level have different names on purpose, even when they are allowed to be produced in the same geographical area.

There are thirteen German defined regions ("Anbaugebiete") in Germany:

1. Ahr – a small region along the river Ahr, a tributary of Rhine, that despite its northernly location primarily produces red wine from Spätburgunder.
2. Baden – Germany's southernmost, warmest and sunniest winegrowing region, in Germany's southwestern corner, across river Rhine from Alsace, and the only German wine region situated in European Union wine growing zone B rather than A, which results in higher minimum required maturity of grapes and less chaptalisation allowed.Noted for its pinot wines – both red and white. The Kaiserstuhl region in the winegrowing region of Baden is Germany's warmest location. One of two wine regions in the federal state of Baden-Württemberg.
3. Franconia or Franken – around portions of Main river, and the only wine region situated in Bavaria. Noted for growing many varieties on chalky soil and for producing powerful dry Silvaner wines. In Germany, only Franconia and certain small parts of the Baden region are allowed to use the distinctive flattened Bocksbeutel bottle shape.
4. Hessische Bergstraße (Hessian Mountain Road) – a small region in the federal state Hesse dominated by Riesling.
5. Mittelrhein – along the middle portions of river Rhine, primarily between the regions Rheingau and Mosel, and dominated by Riesling.
6. Mosel – along the river Moselle (Mosel) and its tributaries, the rivers Saar and Ruwer, and was previously known as Mosel-Saar-Ruwer. The Mosel region is dominated by Riesling grapes and slate soils, and the best wines are grown in dramatic-looking steep vineyards directly overlooking the rivers. This region produces wine that is light in body due to lower alcohol levels, crisp, of high acidity and with pronounced mineral character. The only region to stick to Riesling wine with noticeable residual sweetness as the "standard" style, although dry wines are also produced.
7. Nahe – around the river Nahe where volcanic origins give very varied soils. Mixed grape varieties but the best-known producers primarily grow Riesling, and some of them have achieved world reputation in recent years.
8. Palatinate or Pfalz – the second largest producing region in Germany, with production of very varied styles of wine (especially in the southern half), where red wine has been on the increase. The northern half of the region is home to many well-known Riesling producers with a long history, which specialize in powerful Riesling wines in a dry style. Until 1995, it was known in German as Rheinpfalz.
9. Rheingau – a small region at a bend in the Rhine that provide excellent conditions for winegrowing. The oldest documented references to Riesling come from the Rheingau region and it is the region where many German winemaking practices have originated, such as the use of Prädikat designations. Dominated by Riesling with some Spätburgunder. The Rheingau Riesling style is in-between Mosel and the Palatinate and other southern regions, and at its finest combines the best aspects of both.
10. Rheinhessen or Rhenish Hesse – the largest production area in Germany. Once known as Liebfraumilch land, but a quality revolution has taken place since the 1990s. Mixed wine styles and both red and white wines. The best Riesling wines are similar to Palatinate Riesling – dry and powerful. Despite its name, it lies in the federal state of Rhineland-Palatinate, not in Hesse.
11. Saale-Unstrut – one of two regions in former East Germany along the rivers Saale and Unstrut, and Germany's northernmost winegrowing region.
12. Saxony or Sachsen – one of two regions in former East Germany, in the southeastern corner of the country, along the river Elbe in the federal state of Saxony.
13. Württemberg – a traditional red wine region, where grape varieties Trollinger (the region's signature variety), Schwarzriesling and Lemberger outnumber the varieties that dominate elsewhere. One of two wine regions in the federal state of Baden-Württemberg.
These thirteen German regions (Anbaugebiete) are broken down into 39 districts (Bereiche) which are further broken down into collective vineyard sites (Großlagen) of which there are 167. The individual vineyard sites (Einzellagen) number 2,658.

Germany   There are no products in this category